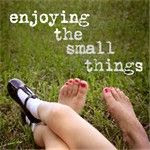 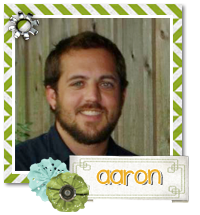 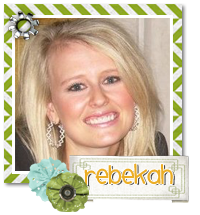 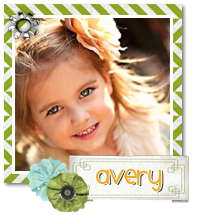 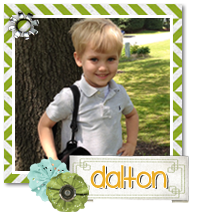 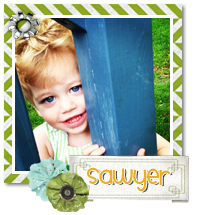 Fall is just too fun around here ... And with all the Fall Happenings I have gotten overwhelmed with keeping up with the blog, causing me to fall further and further behind. Which is probably why I never even documented Dalton or Sawyer's births on the blog ... I'm determined to fix that eventually. HOWEVER, for now I'm just going to update the last month or so ... because there have been things worth mentioning amidst all the general randomness! :)
I have kept my real camera locked away in my hodge podge drawer and so all I can offer is phone pics ... don't get picky on me.

This school year has been so fun and just all together fantastic. Whereas, last year it was kind of a battle twice a week to get Dalton in the door of Mother's Day Out, this year they both LOVE pre-school! They race in the door every day and on their "off" days are so confused as to why they can't go to school. We have had a new issue, though: Avery's wardrobe. It is a daily battle. If I make the mistake of not discussing her outfit for school the next day the night before, it can make us at least 15 minutes late. She has her own ideas of what she needs to wear and will flip on occasion at my selections. Last week she was wearing some funky patterned pants that I tried to pair with a plain white tee. She started flapping her hands and throwing an all-out fit saying, "I won't wear that white shirt, don't make me! I'll look like a sheep and all the kids will think I'm a sheep." I busted out laughing ... she has a flare for the dramatics. Here she is on a day where I gave her free rein to pick out her attire ... complete with a tye-dyed lizard snap bracelet and Princess earrings... 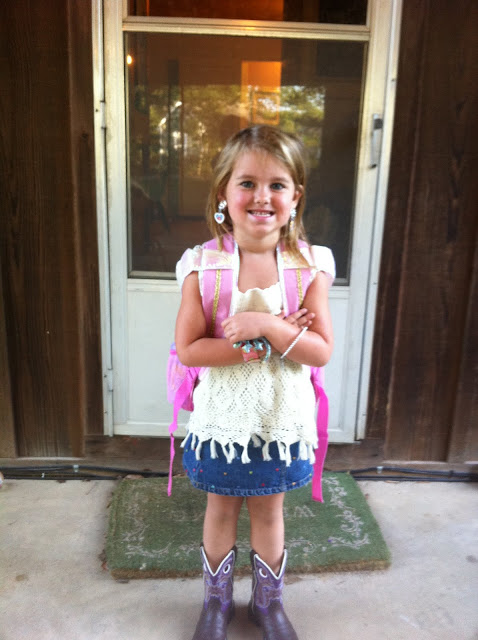 I put this picture on Facebook and the child received over 50 comments of approval for her wardrobe collaboration ... way to go Av, way to go.


This little pic of Sawyer makes me laugh. We had a TV in the suburban but the headphones were bigger and so my kiddos refused to wear them. However, in the van there are TVs and the headphones are more child-sized. There are only two pairs and so Sawyer usually loses the battle on that one. Every once in a while I'll turn on his Baby Einstein DVD and let him have a turn, he just kicks and squeals and gets super excited. All that aside, I just like this picture of him ...He's the cutest. 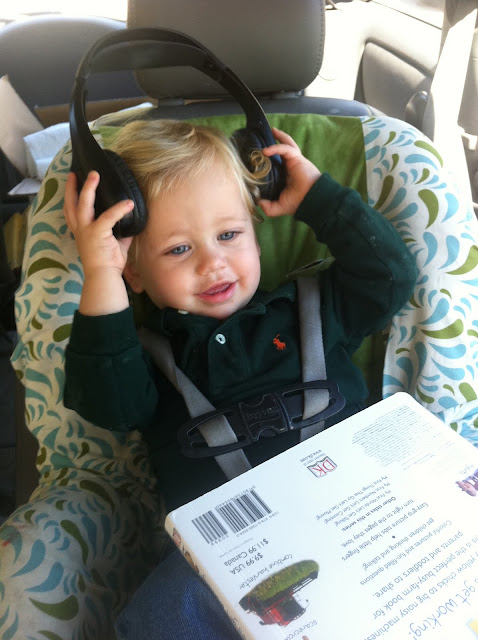 I have been Deer Widowed again ... meaning most mornings Aaron gets up early to head out into the woods behind our house and most afternoons he can be found there as well. My freezer is already stocked with a couple deer kills and I have been trying my darndest to find recipes where I can disguise the gamey-ish meat. It's really not so bad and the kids love to say they're eating deer meat; Avery always asks, "Was this a monster buck?"
I love that Aaron takes the kiddos on occasion outside too and they think it is super fun. Aaron even took Dalton on a Hog Hunt a couple weeks ago. Aaron loved putting pictures on Facebook pretending that Dalton killed a hog. I can assure you that was not the case, and if I discover that Dalton has had any gun experience in the next 10 years I may have a husband for sale. Just sayin'. 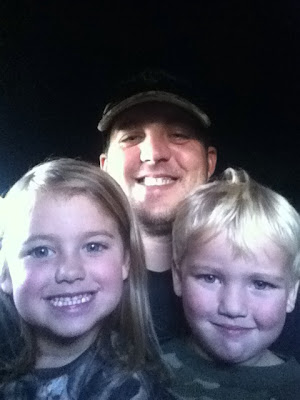 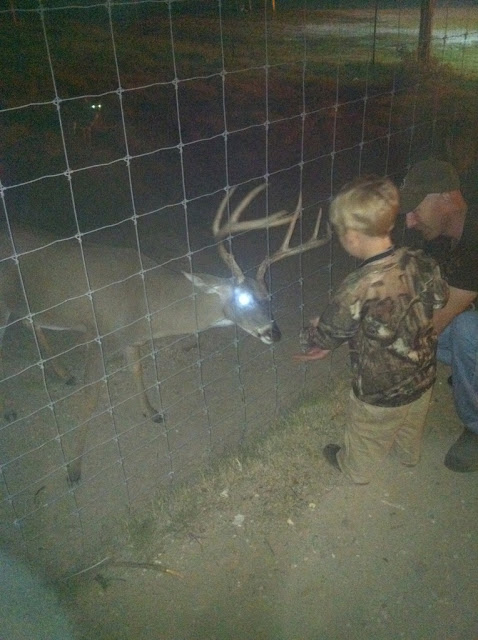 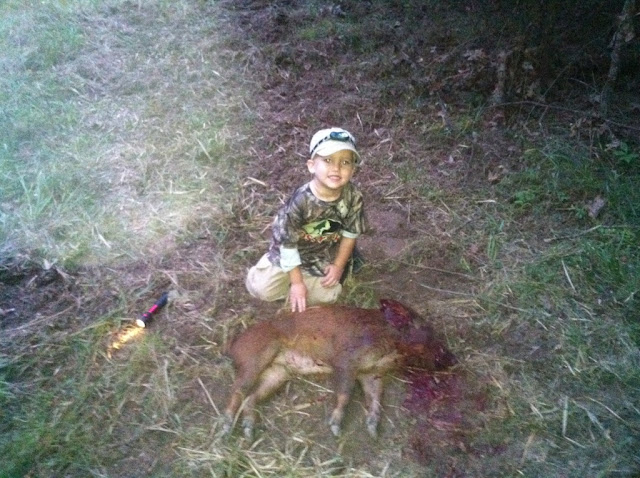 He's proved to be just as much of an outdoor enthusiast as his daddy..

Mr. Sawyer Boone received his first hair cut this month. I didn't expect to be upset or emotional but I was literally queasy when I saw his little curls dropping to the floor. Sawyer has had some hair craziness for his entire life and it was sad to see it go. I still left it a little longer because his little head is still covered in sweet curls that I couldn't bear to part with ... He's just edible. 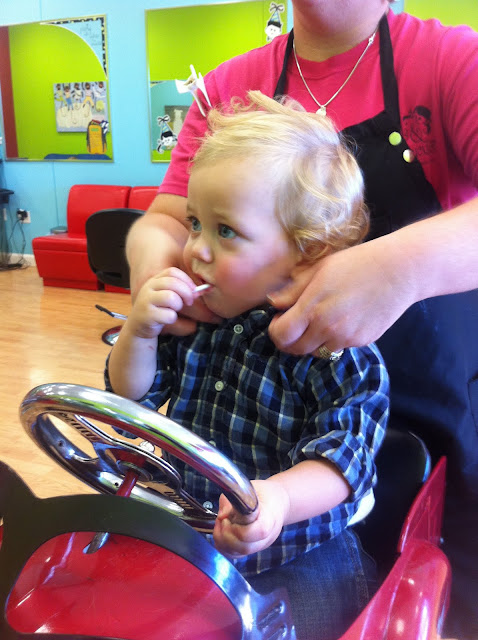 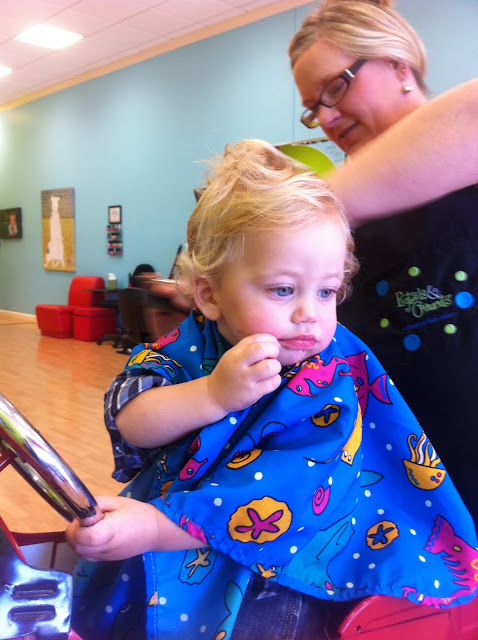 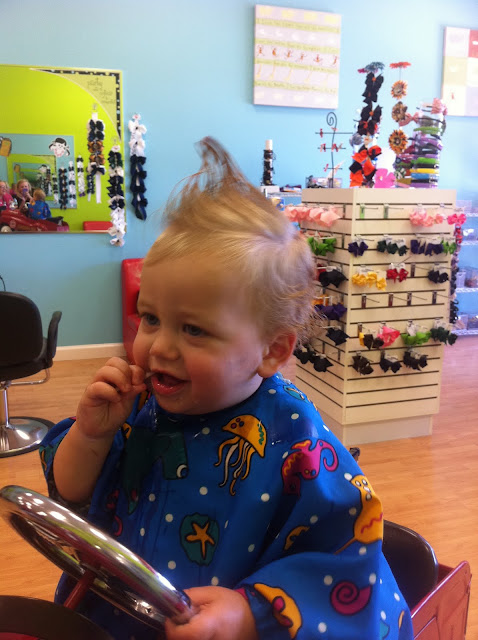 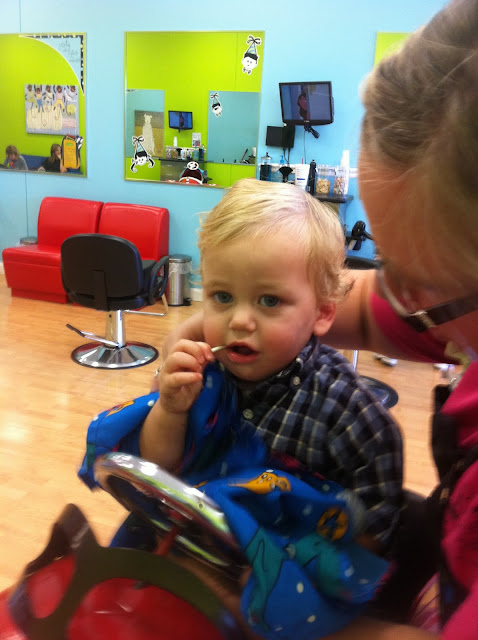 I'm having a minor obsession with this picture ... 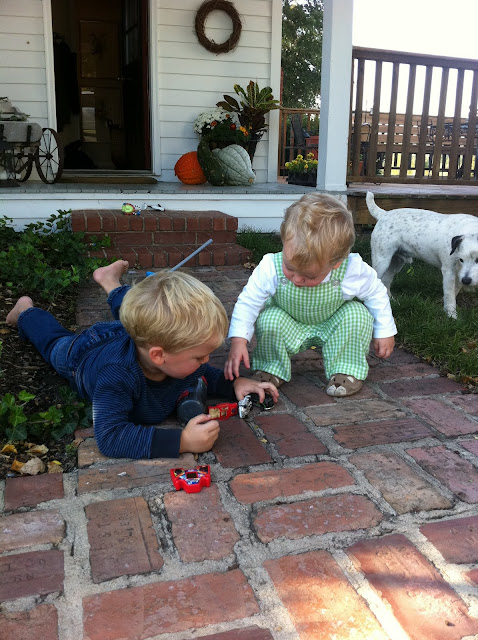 It's such a sweet reminder of how WELL Dalton and Sawyer are finally playing. Sawyer just idolizes Dalton and Dalton LOVES Sawyer. All day he's following Sawyer around, "Babe, Babe, what are you doing, babe?" Cutest. I love knowing they'll have a built in BFF for life ... I so want that for Avery too. She needs a sister. ;)

In other fabulous news, I was alloted a weekend away with some super fun girlfriends this month. Seriously we started planning this venture almost two years ago and it was just as fun, if not MORE fun than we'd hoped! One of my fun friends, Mandy, turned 30 this month and in celebration we took a long, leisurely weekend to Destin and it was so much fun. I feel like I need to say it again sooooo muchhh funnn!!!!!
We drove down on a Thursday morning and spent all day Friday, Saturday, and Sunday on the beach. We stayed up late chatting and playing games, slept in, ate super yummy food, and of course hit the outlets. I think we all kept thinking we were forgetting something as we walked down to the beach with only a towel, magazine and sunscreen ... and a Margarita or two. ;) When some of the randy randoms would ask if we were in town for a bachelorette party we proudly told them that we had 12 kids between us ... And I represented 25% of those. Ha! Whoop Whoop! ;)
I think it was (one more time) the most fun trip I've ever been on! Loved it! So thankful for the getaway and sweet friends to enjoy it with! Here are some pics! 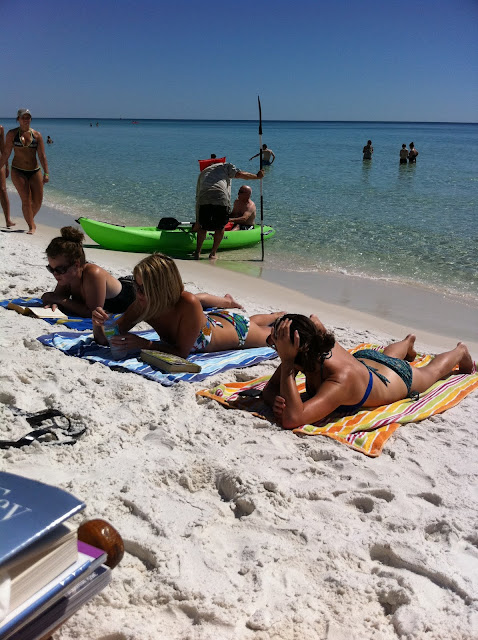 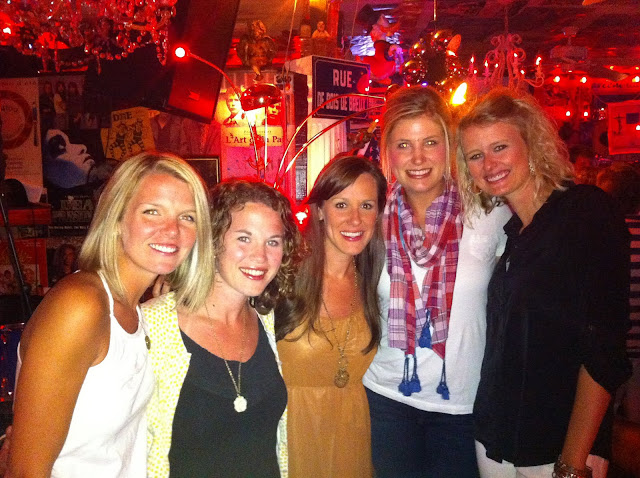 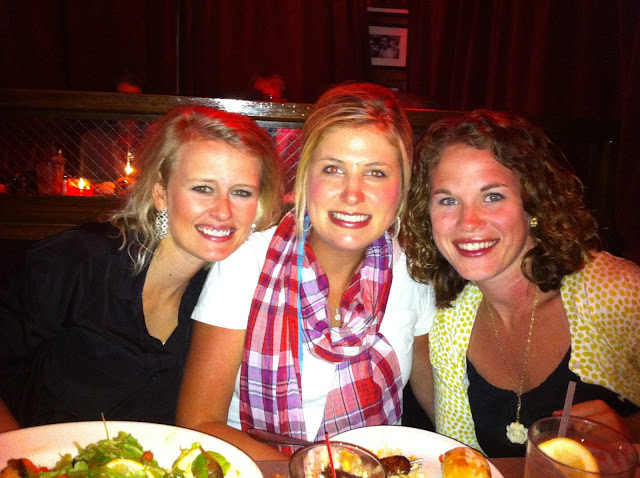 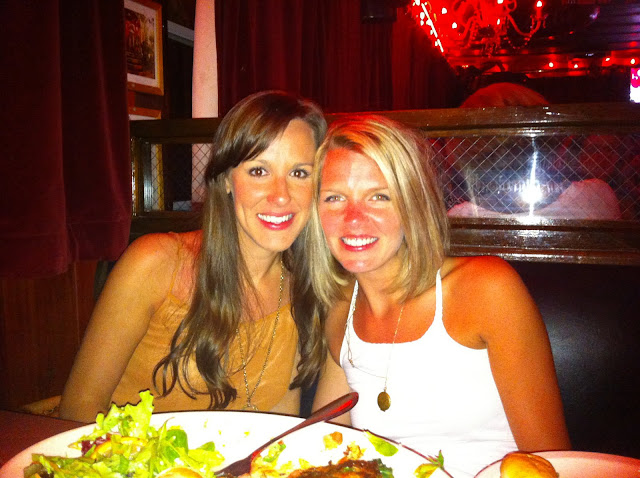 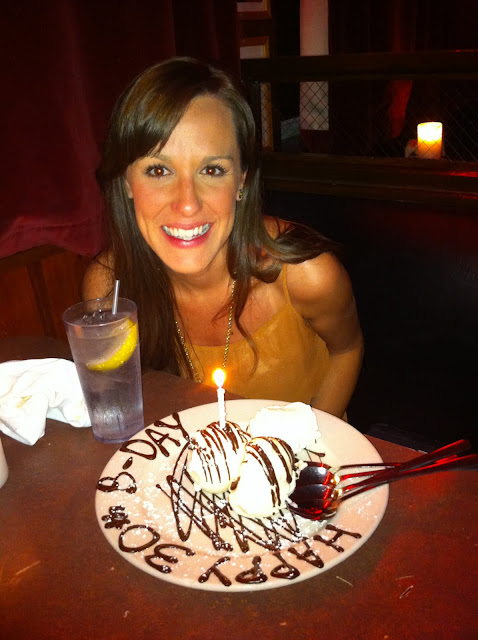 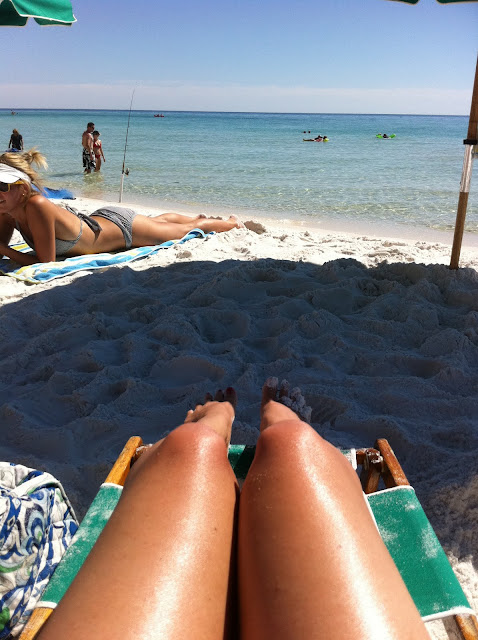 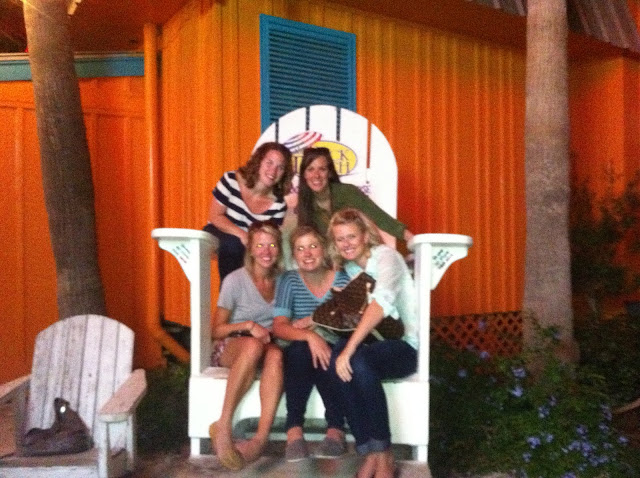 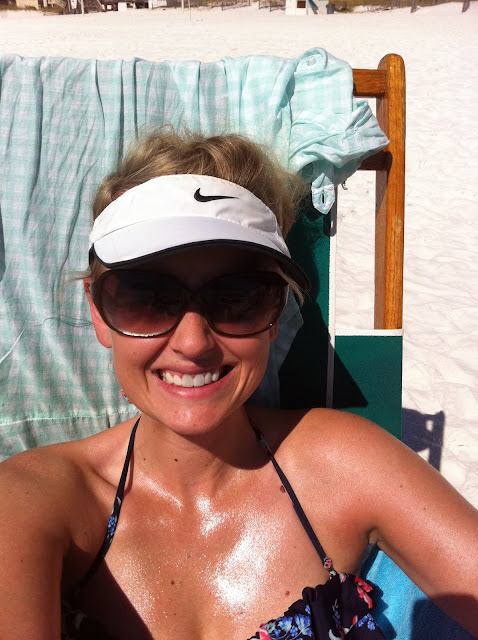 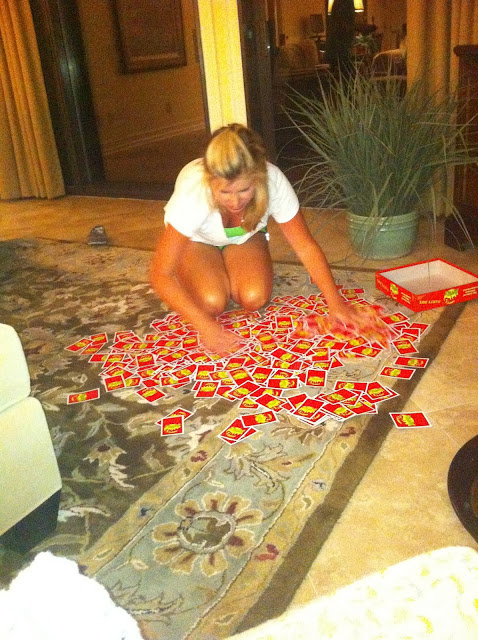 ** A little different than the 800+ pics I took after going to the beach with the fam this summer ... I didn't even bring a camera on this trip! Thank goodness for iPhones!! :)

Okay, that's all for now! Hopefully tomorrow I will document our super spectacular event this week ... The Birth of Benjamin Noah Wellons!!! EEK!!! He's just the cutest thing and I'll get all the scoop on here tomorrow! :)

Posted by Boonies in the Boonies at 8:54 AM 1 comments 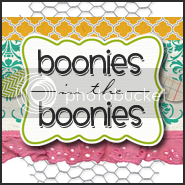 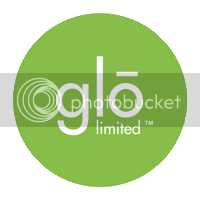